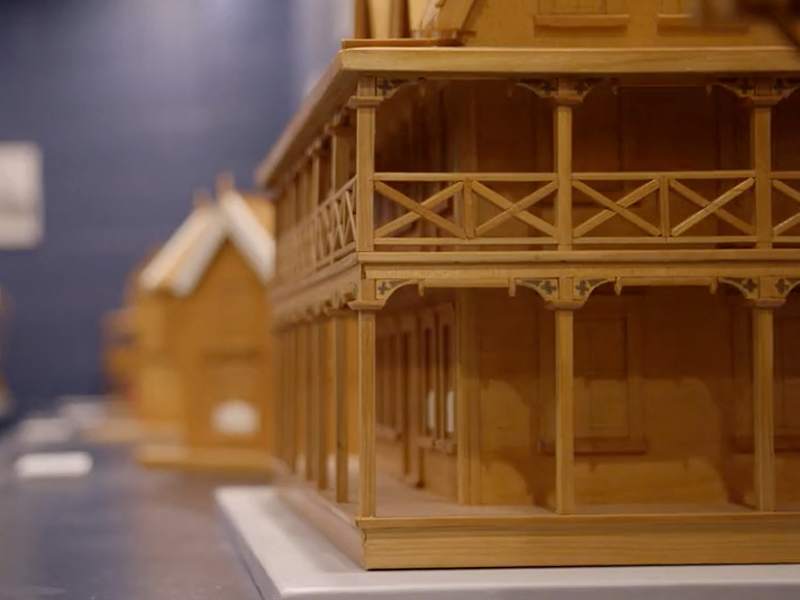 Thames played a major role in New Zealand’s early colonial past but the history of the area goes back even further. When Captain Cook sailed into the Firth of Thames in 1769, Maori had been living in the area for more than 400 years. In its heyday at the end of the 1800s, more people lived in the district than anywhere else in the country – there were more than 18,000 people and more than 100 hotels.

The Heritage Rescue team came to the town to help keep Thames Museum's doors open. The museum's biggest problem was not enough visitors. On average, it was getting five or six people a day, which is a shame because it's a nice little museum.

The museum had an under-used storage room which the Heritage Rescue team repurposed as exhibition space for as many locally handcrafted kauri models as possible to be displayed. The walls were lined and plinths created to raise the models to eye height.

To create an evocative environment and allow the kauri models to really stand out, the walls and ceilings were painted in Resene Biscay, a rich smoky blue that made the warmth of the wooden models pop. For the plinths,  Resene Indian Ink was used to complement the other colours in the room. The exhibition titles were further highlighted with a Resene Gold Dust metallic and positioned onto ribbons of Resene Indian Ink.

In keeping with the styles of the models, a new timber door frame was installed and stained with Resene Oregon to look similar to the kauri.

For museums, it is important to keep in mind the curing period of the paint, so the team used Environmental Choice approved waterborne products.

To add further interest and allow visitors to connect the buildings to their past and present locations, the team has projected an old map of the township onto the floor and carefully painted it, along with rag-rolled edges to give it an aged paper effect. Key locations were then marked out with numbered red squares.

Here’s a glimpse of last Sunday’s programme, or to see more, see the episode here. For more heritage rescues, tune into to Choice TV this Sunday at 7.30pm.