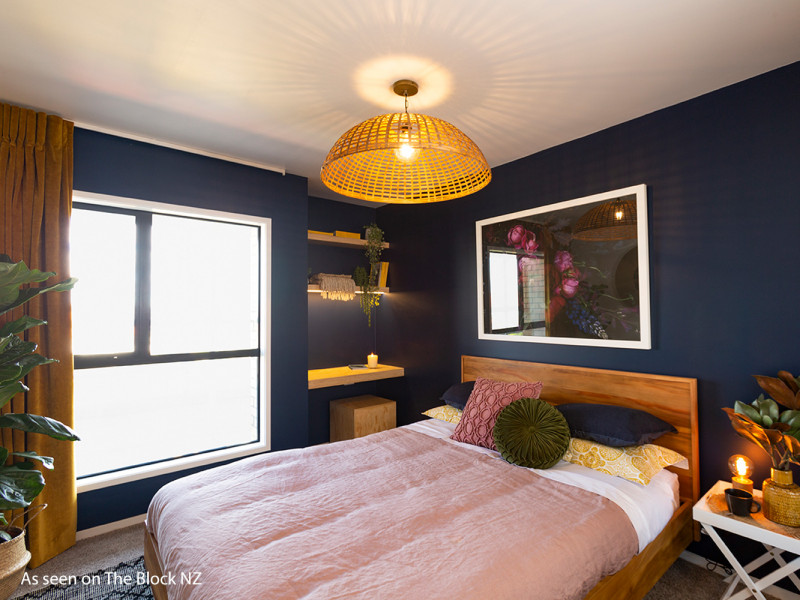 It was all-go on week one in the new season of Three’s The Block NZ. First up the teams were tasked with making over the guest bedroom of their houses with big stakes up for grabs. The designers of the winning guest bedroom at room reveal were given the right to choose which of the four Hobsonville Point houses would be theirs to make over for the rest of the season. It turned out that everyone was gunning for house four, as it has the street appeal and plenty of sun.

Each team was given a different design brief for their guest bedroom. 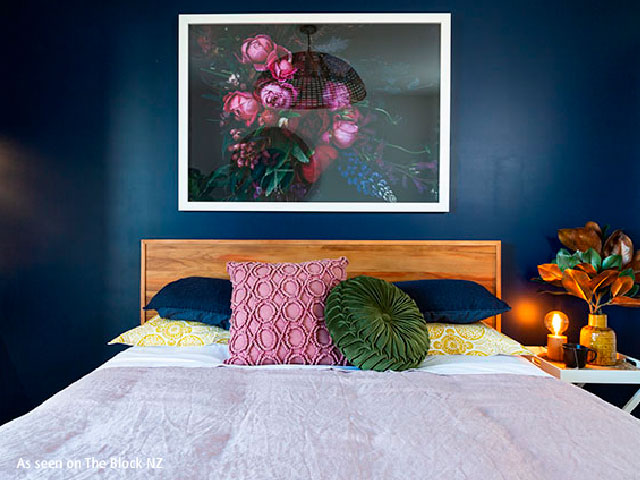 Amy and Stu took out the winning spot for the first room, winning that all-important right to choose which house they’d take on for the rest of the series.

The judges, Kristina and Jason, absolutely adored their Moody Botanical room, saying it had totally nailed the brief.

Amy and Stu went with some very on-trend colours in their dramatic colour scheme, opting for  Resene Blue Night on the walls, with a feature wall and the ceiling in  Resene Alabaster. They then added some gorgeous accents in super-fashionable mustard tones.

The judges particularly liked the way the artwork was complemented by the wall colour, and made note of the choice of bed, saying it was perfect for the room.

Overall, the space was clean, smelled amazing and the room painting was well executed.

Amy and Stu opted to move into house four as a result of their room reveal win. 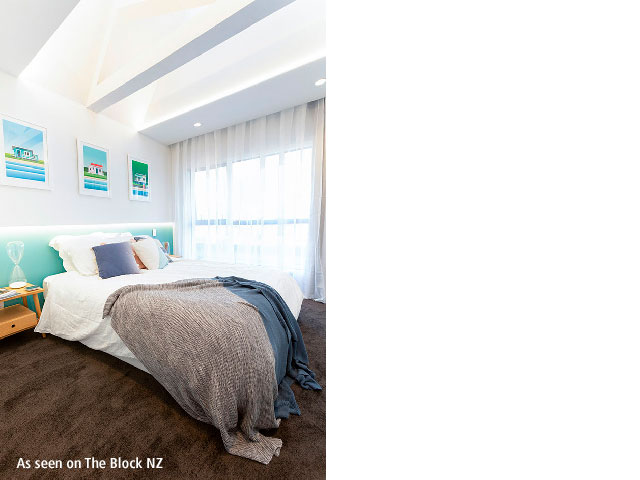 Though Ben and Tom got caught a little short when it came to time management this week, ending in last place, the judges still found things to like about their Coastal Retreat-themed room.

The judges said their first impression of the space was it clearly had a very interesting concept with some great design elements. They loved the fact that it was light and bright, and that the skylights – which is what caused some timing problems – really opened up the space.

The judges commended the use of dimmable LED lighting in the bedroom, and the on-brief art.

Ben and Tom’s choice of layering Resene Sea Fog on the walls with Resene Half Sea Fog on the ceiling really makes that bed head-style feature sing and helps the whole room meet its Coastal Retreat brief. A hand-made fabric headboard, made by Em’s dad, helped propel the BFFs into second place this week.

The judge’s described the bespoke piece as a “stunning statement piece”, with its shape and texture very on brief.

The subtle pink neutral Resene Dust Storm on the walls made a perfect background for the on-trend deep blue duvet cover, with layers of different jewelled tones and lush textiles for that “lux” feel. It was accentuated by the choice of the classic Resene Alabaster on the ceiling.

The judges felt the girls’ styling and accessorising was really well done, with some fantastic elements used in the room and “impeccable” execution of the painting all round. 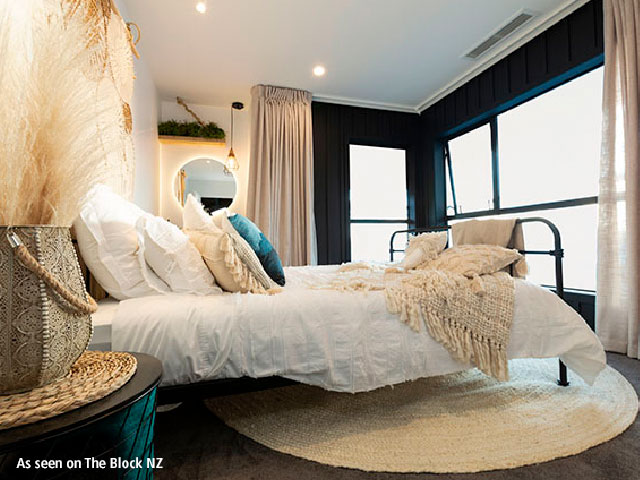 After some back and forth over whether or not their wall should be black or white, Claire and Agni opted for Resene Black, which lent the space a touch of drama, accented by the use of the clean, refreshing Resene Double Alabaster on the rest of the walls and the ceiling

With a brief of Desert Chic the couple, who were decorating in the sought-after house four, opted for layers of natural fibres, textiles and colours throughout the rest of the room, offset with a touch of teal.

The judges felt the dark feature wall didn’t really fit the theme, but they did love the use of accessories around the room particularly the dramatic macrame wall hanging. Jason also gave the pair points for the layering and styling of the bed.

Overall, the judges described the room as a good first effort, but suggested Claire and Agni take more risks with their colour choices going forward.

Catch the The Block NZ on Three every Sunday at 7pm, and Mon-Wed 7.30pm, or watch On Demand here.